“Aligned with the Ancestors” by Shannon Wianecki

Aligned with the Ancestors

Lomilomi — Hawaiian massage — seeks to balance the body down to the bone, and all the way back in time.

Hawaiians believe that mana, life force, dwells within the bones. Lomilomi practitioners use a variety of techniques to skillfully unlock the tension in the muscles and ligaments surrounding the bones, which allows mana to circulate freely. “Sometimes, says Naluai, “there can be a miraculous healing.”

Naluai knows something about miracles; her career in the healing arts has been marked by the kind of encounters that some call coincidences, others divine intervention. In college she majored in physical therapy, obtaining her master’s in sports medicine. Soon after, she had the rare opportunity to study with Margaret Machado, a renowned native Hawaiian healer who, in the 1970s, was among the first to share lomilomi with the world.

Traditionally, the science and lore of lomilomi was kept secret. Each Hawaiian family had a healer who would pass his or her knowledge on to a chosen apprentice. But like many indigenous arts, lomilomi was in danger of extinction; too few elders remained to teach the younger generation. Machado felt it best to open her oceanfront home in Kealakekua, on Hawai‘i Island, to anyone willing to learn.

In 2000 Naluai arrived. She and a dozen other students camped out on the lanai, where they learned to massage using their forearms, palms, knuckles, elbows, knees, and feet — even sticks and heated stones. Machado taught them to collect sea salt and black volcanic sand for exfoliation, and to sweat out toxins in a lauhala-thatched sweat house.

Practicing la‘au lapa‘au (plant medicine), they drank herbs to better tolerate the heat, and rubbed fresh aloe onto their skin.

“My first full lomi massage was transformational,” says Naluai. “I knew this is what I was meant to do.” Sports medicine and its fixation on isolated joints seemed inadequate after this taste of holistic medicine. With an appetite whetted for Hawaiian healing arts, Naluai sought out relatives on the kanaka maoli (native Hawaiian) side of her family — someone who might have traditional knowledge. She came up empty. As far as she knew, any healers within her family had passed on, taking their secrets with them.

She traveled around the state, learning from various lomilomi practitioners, until a friend introduced her to Aunty Mahilani Poepoe. The voluptuous, white-haired Hawaiian greeted Naluai with a knowing smile. “My grandmother came to me in a dream two days ago,” the elder woman said. “She told me you were coming and to be ready to teach.” After talking, the two women discovered that Poepoe’s grandmother and Naluai’s great-grandfather were sister and brother. Naluai had found the healer within her family.

Poepoe ran a free lomilomi clinic at her home in Waiehu, a predominantly Hawaiian neighborhood in central Maui. From sundown to well past midnight each Wednesday, people gathered in the carport. They brought along their keiki (children), grandparents, and even animals for healing. They offered mangos and pickled pipinola (squash) as payment and played ‘ukulele to pass the time until their turn with Poepoe.

“She was a seer,” says Naluai. “She could see where the injuries were in their bodies, or if nutrients weren’t being assimilated. She’d read them, and then send them over to us working on the tables.” Naluai and a few other assistants would massage them. No privacy, no fancy spa atmosphere — just powerful bodywork.

Lomilomi has its roots in lua, Hawaiian martial arts. Ancient warriors needed to know how to mend bones in the field. A lua master’s final training includes ho‘onoho iwi, or “resitting the bones,” says Naluai. “When you relax the muscles and attachments to joints, you can reset bones easily.”

Often, the therapeutic benefits of lomilomi begin before a practitioner lays hands on a client. Hawaiian healers commence each treatment with a prayer. “Sometimes Aunty Mahi would just pray with someone and the ailment would fall away,” says Naluai. As fabulous as this sounds, even Western medicine acknowledges that shifts in a person’s attitude can make all the difference in his or her ability to heal.

During one of the evening sessions in Waiehu, Poepoe motioned towards a very sick woman, a local realtor who was dying of liver failure. “Talk to her when you’re ready to move upcountry,” Poepoe told Naluai, who looked askance. The young massage therapist lived in Kihei at the time; she had no intention of relocating upcountry — nor did the realtor look like she would live long enough to make another sale. Soon after, Poepoe herself passed away, and Naluai decided to open her own healing center. When she went looking for the right location, Poepoe’s words proved prophetic. The realtor, now fully recovered, sold Naluai a special parcel of land up in the forest above Makawao town.

Ho‘omana Spa is tucked into a curve along Pi‘iholo Road. It’s a far trek from just about anywhere on the island, but those who make the journey are well rewarded. Naluai brings ancient wisdom into a contemporary luxury-spa setting. The grounds are lushly landscaped with fragrant flowers and medicinal plants. The elegant treatment rooms feel cozy, like a bedroom in your favorite aunty’s house. Couples can retreat into the bathhouse, where they can sink into two deep marble tubs filled with warm water and aromatic herbs.

On one occasion a man visiting from Barcelona approached the few steps up to the door at Ho‘omana with trepidation; for years his injured knee had forced him to walk crablike up stairs. To his astonishment, the pain disappeared as he climbed the spa’s stairs. He asked Naluai, “What happened? How did you do that?” She replied that she had simply cleared the energy surrounding the spa.

An even more powerful healing recently occurred during a fourhanded lomilomi massage. The spa’s bookkeeper bought this lavish treatment for her husband, who had difficulty speaking after suffering a stroke. One of the benefits of four-handed lomilomi is that the two practitioners working in tandem are able to recalibrate the client’s connection between the right and left brain. After the massage, the man was able to carry on a normal conversation with his wife.

Twice a year, Naluai takes five students through a 600-hour certification program, inducting them into the ancient rites. In addition to the usual lessons in anatomy and technique, her students learn Hawaiian chants, plant medicine, and ho‘oponopono (conflict resolution). Before graduating, they tour sacred sites around the island and perform community service, such as caring for heiau (temples), and working in lo‘i kalo (taro patches).

“When you bring the physical body into alignment, it brings the spiritual and emotional body into place . . . so that we walk in line with our ancestors,” says Naluai. “Each vertebrae is an ancestral support that helps us to stand and walk.”

Lomilomi has the potential to “heal a person’s path backwards and forwards,” she says. She’s a living example. By picking up the lost thread of lomilomi, Naluai reestablished the lineage of healers within her family. Her many beneficiaries include not only her clients, but her students, children, and future grandchildren. 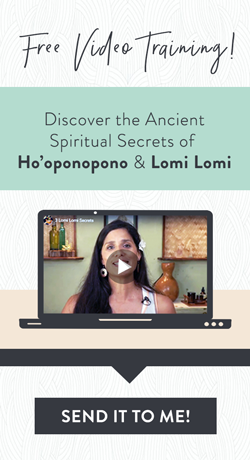